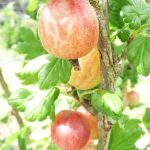 A most understated fruit. Some love them, some hate them. Some remember the furry, sour fruits on the bushes down the bottom of Grandad’s garden. Of course Gooseberries are tart(ish!); you will have to try before you decide which camp you are in. You might be pleasantly surprised… Our varieties – green, pink and red have been specially selected for their sweet, juicy flavour. Like Raspberries, they freeze beautifully. Best eaten fresh, they can also be made into chutney, jam, smoothies, Gooseberry Fool, ice cream… the list goes on…

Powered by WordPress and WordPress Theme created by Super Solutions.